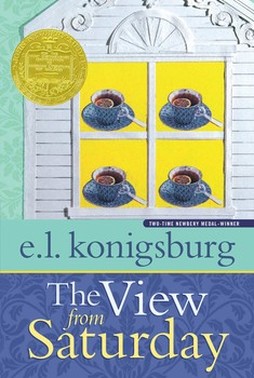 The View From Saturday
By: E.L. Konigsburg
Grades 3-8

​HOW HAD MRS. OLINSKI CHOSEN her sixth-grade Academic Bowl team? She had a number of answers. But were any of them true? How had she really chosen Noah and Nadia and Ethan and Julian? And why did they make such a good team?
It was a surprise to a lot of people when Mrs. Olinski's team won the sixth-grade Academic Bowl contest at Epiphany Middle School. It was an even bigger surprise when they beat the seventh grade and the eighth grade, too. And when they went on to even greater victories, everyone began to ask: How did it happen?
It happened at least partly because Noah had been the best man (quite by accident) at the wedding of Ethan's grandmother and Nadia's grandfather. It happened because Nadia discovered that she could not let a lot of baby turtles die. It happened when Ethan could not let Julian face disaster alone. And it happened because Julian valued something important in himself and saw in the other three something he also valued.
Mrs. Olinski, returning to teaching after having been injured in an automobile accident, found that her Academic Bowl team became her answer to finding confidence and success. What she did not know, at least at first, was that her team knew more than she did the answer to why they had been chosen.
This is a tale about a team, a class, a school, a series of contests and, set in the midst of this, four jewel-like short stories -- one for each of the team members -- that ask questions and demonstrate surprising answers.
Level 5.9; 7 Points
Activity One
The sea turtles that Nadia and Ethan help save are a threatened species. Find out the difference between threatened and endangered. What animals that live in your area of the country have been placed on the threatened or endangered species list by the Environmental Protection Agency? What state and federal laws protect them? How are the laws enforced in your state?
Activity Two
Pretend that you are on the staff of The Epiphany Middle School newspaper. Write a feature article about "The Souls." Include an interview with each of "The Souls" and Mrs. Olinski.
​Activity Three
Find and examine carefully a map of New York state. On a large sheet of paper draw an outline of the state of New York and then create the boundaries for the Academic Contest. Create the regions of: ​
Home