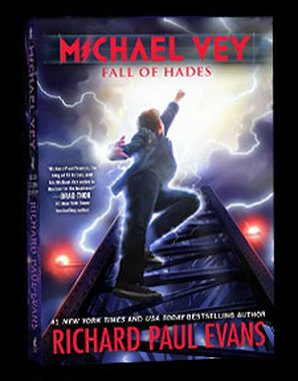 Michael Vey: Fall of Hades
By: Richard Paul Evans
Grades 3-5
​
Michael and his friends try to recruit Hatch's Electric Youth to their side as the thrilling action continues in this electrifying sixth installment of the New York Times bestselling series!
Level 4.4; 11 Points
Activity One
The 19 members of the Electric Youths each have a different and distinct ability. If you could choose to have one of their powers, which one would you choose? Name the character, their power and why you would like to be like them. You need to write a poem that includes at least
5 sentences and a picture to go along with the character, or rather – what YOU would look like.
Activity Two
This book is book six in a seven-book series. If you were going to write a book to end this series, how/what would you do? For this activity, you can either write for me, or develop a movie, or develop a series of pictures that would be similar to a cartoon. Be creative and explain the decisions that you’ve made.
​Activity Three
Illustrate what you think is the climax of this story. You might have a different answer than I do and that it tells us a good story. Are you ready to read book 7?
Home