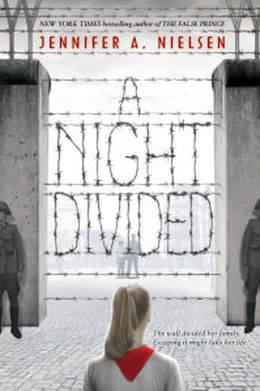 A Night Divided
By: Jennifer A. Nielsen
Grades 6-8
​With the rise of the Berlin Wall, twelve-year-old Gerta finds her family divided overnight. She, her mother, and her brother Fritz live on the eastern side, controlled by the Soviets. Her father and middle brother, who had gone west in search of work, cannot return home. Gerta knows it is dangerous to watch the wall, to think forbidden thoughts of freedom, yet she can’t help herself. She sees the East German soldiers with their guns trained on their own citizens; she, her family, her neighbors and friends are prisoners in their own city.
But one day, while on her way to school, Gerta spots her father on a viewing platform on the western side, pantomiming a peculiar dance. Then, when she receives a mysterious drawing, Gerta puts two and two together and concludes that her father wants Gerta and Fritz to tunnel beneath the wall, out of East Berlin. However, if they are caught, the consequences will be deadly. No one can be trusted. Will Gerta and her family find their way to freedom?

Activity Two
Compare the two sides of Berlin: East vs West. Use a sheet of paper and put East and West on the top of each page respectively. Write at least 5 ways in which they are different. Which side would you rather live on if you had to? On the bottom of that "side"- write your reasons for wanting to live there.


​
​Activity Three
Visit http://www.jennielsen.com/books/a-night-divided. Write to the author, Jennifer A. Nielsen. Share your favorite parts and how this book impacted your thinking.