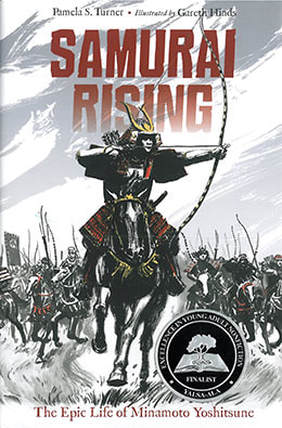 Child exile.
Teenage runaway.
Military genius.
Immortal hero.Yoshitsune had little going for him. Exiled to a monastery, he had no money, no allies, and no martial training. He wasn’t big or strong or good-looking. His only assets were brains, ambition, and a dream. But childhood dreams can change history.
At the age of fifteen, Yoshitsune escaped. Blow by painful blow, he learned the art of the sword. Fall after bruising fall, he mastered mounted archery. He joined his half brother Yoritomo in an uprising against the most powerful samurai in Japan.
This is the story of insane courage and daring feats, bitter rivalry and fatal love. Based on one of the great works of Japanese history and literature, Samurai Rising takes a clear-eyed, very modern look at the way of the samurai—and at the man who became the most famous samurai of all.
Level 7.2; 6 Points
Activity One
When the Minamoto fight the Taira, they are rebelling against the governing family of Japan. Should a government be overthrown if it’s corrupt? Do you think people owe allegiance to themselves and their own conscience, or to their government?
Activity Two
Research an event from the “Yoshitsune and the Wider World” time line on page 174. Then write an essay about the similarities and differences between Yoshitsune’s story and that world event.
​Activity Three
Create family trees for the book’s four main families and show how they all connect in the story. For an additional challenge, also add in unnamed characters (wives, relatives, etc.) from the story. Remember to practice your pronunciation of these names!​
Home