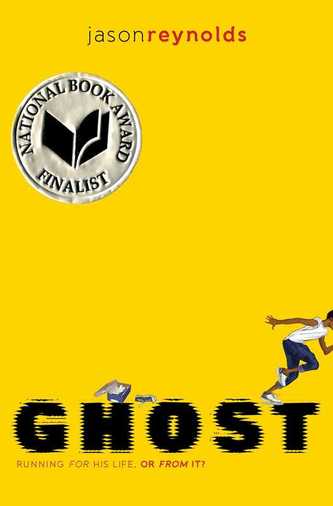 Ghost wants to be the fastest sprinter on his elite middle school track team, but his past is slowing him down in this first electrifying novel of a brand-new series from Coretta Scott King/John Steptoe Award–winning author Jason Reynolds.

Ghost. Lu. Patina. Sunny. Four kids from wildly different backgrounds with personalities that are explosive when they clash. But they are also four kids chosen for an elite middle school track team—a team that could qualify them for the Junior Olympics if they can get their acts together. They all have a lot to lose, but they also have a lot to prove, not only to each other, but to themselves.

Ghost has a crazy natural talent, but no formal training. If he can stay on track, literally and figuratively, he could be the best sprinter in the city. But Ghost has been running for the wrong reasons—it all starting with running away from his father, who, when Ghost was a very little boy, chased him and his mother through their apartment, then down the street, with a loaded gun, aiming to kill. Since then, Ghost has been the one causing problems—and running away from them—until he meets Coach, an ex-Olympic Medalist who blew his own shot at success by using drugs, and who is determined to keep other kids from blowing their shots at life.
Level 4.6; 6 Points
Activity One
Jason Reynolds uses world records as a framing motif in the novel. Research world records and create a poster about some of the most interesting world records that you find. If you were going to try to break a world record, which one would you attempt?
​Activity Three
When Coach asks Ghost’s mother to let him join the team, Ghost reflects, “I felt like I had seen this in every single sports movie I had ever watched. All of them. Ma’am, your son has potential. If this went like the movies, I was either going to score the game-winning touchdown (which is impossible in track) or . . . die.” Compare Ghost to a classic sports movie (ex. Rudy, Bend It Like Beckham, Miracle, Hoop Dreams, 42, The Bad News Bears, Jim Thorpe—All American). Are there any similarities between the film you watch and Ghost?
Home